LECOM has received formal notification that at a meeting in Chicago in late August, the Council on Osteopathic College Accreditation (COCA) of the American Osteopathic Association gave approval to the opening of an additional LECOM location at Elmira College.  The Elmira campus joins LECOM campuses in Erie and Greensburg, Pennsylvania, and in Bradenton, Florida and the College expects to have the first Elmira medical students start in late July 2020 pending final approval by the New York Department of Education Board of Regents.

According to Dr. Ferretti, “LECOM is extending medical education to the Elmira College campus to attract students who will fill the need for physicians in the Southern Tier and Western New York.”  Upstate New York has a large, rural underserved population with a critical shortage of physicians.  Medical school graduates often continue their post-graduate training and establish residency in the same area in which they attend medical school.  LECOM has seen many of its graduates stay and practice near its campuses in northwest and southwest Pennsylvania and southwest Florida.

The College opened in Erie in 1993 to train Doctors of Osteopathic Medicine, added the Florida campus in 2004 and the Greensburg campus in 2009.  In addition to the College of Osteopathic Medicine, LECOM operates a School of Pharmacy, School of Dental Medicine and School of Health Services Administration.  LECOM has more than 4100 students and the Elmira College location will increase enrollment by more than 400 students in a few years.

Since 2012, LECOM has sent third-year and fourth-year students for clinical education at the Arnot Health System in Elmira and other surrounding hospitals in the Southern Tier.   “Our relationship with the Elmira medical community and other affiliated hospitals in the region exposed LECOM students to quality training” said Richard Terry, D.O., MBA, Associate Dean of Academic Affairs for LECOM at Elmira. “The affiliation demonstrated that LECOM could better serve the region by bringing all four years of medical education to Elmira.” 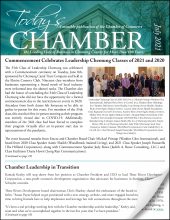